5 routes to get to know Marbella by hiking 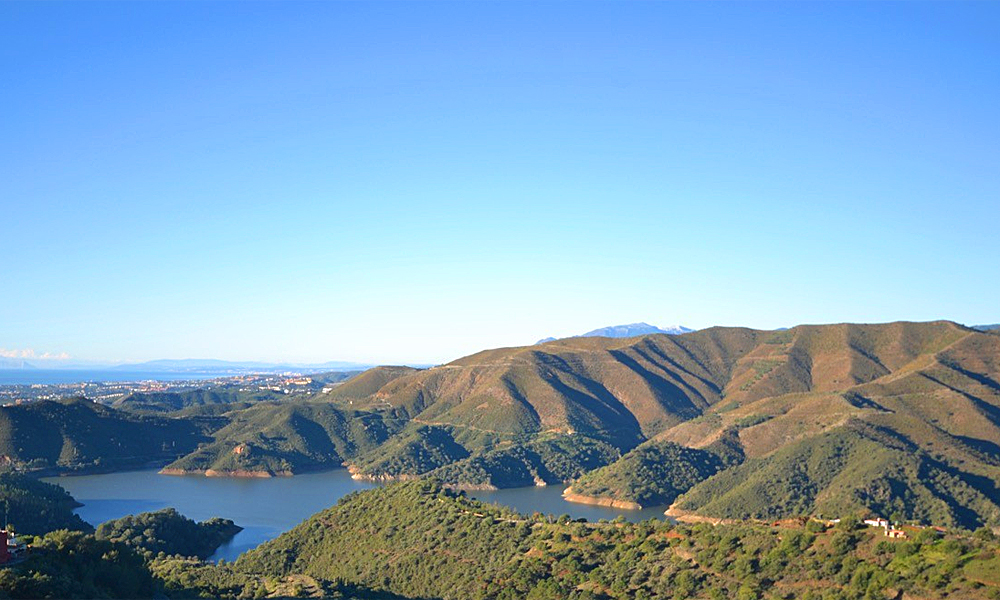 Hiking is having a moment. Be it with friends, family or on our own, in order to get away from the routine and breathe in some fresh air, more and more of us are grabbing a backpack and embracing the adventure of heading out into nature, and where better to do … Read More

Hiking is having a moment. Be it with friends, family or on our own, in order to get away from the routine and breathe in some fresh air, more and more of us are grabbing a backpack and embracing the adventure of heading out into nature, and where better to do this than the area surrounding Marbella, which is home to a great many places to practice this sport. Istán, El Refugio de Juanar, La Serranía de Ronda… there are many impressive itineraries and routes that are perfect for any trekking and nature lover.

Below is our selection of the best trekking routes in Marbella: 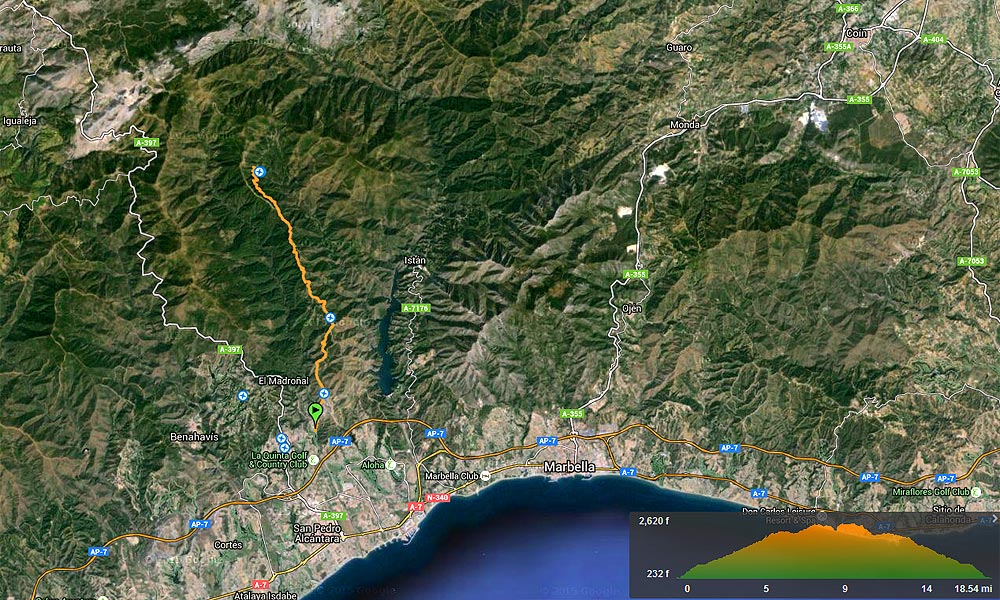 El Castaño Santo is approximately half way between San Pedro Alcántara and Las Conejeras. The trails are very well signed and have been recently prepared by the Government of Andalusia. To start the trek towards El Castaño Santo, take the forest trail that starts next to La Quinta golf course.

El Castaño Santo is a tree that is thousands of years old and an impressive size. Being near this tree is an experience that is impossible to put into words. The tranquillity emanating from the chestnut tree and the way it stands in harmony with its surroundings is a true metaphysical experience.

If you continue northbound along the path to Ronda you will reach Puerto de la Refriega. We recommend bringing provisions for the journey. 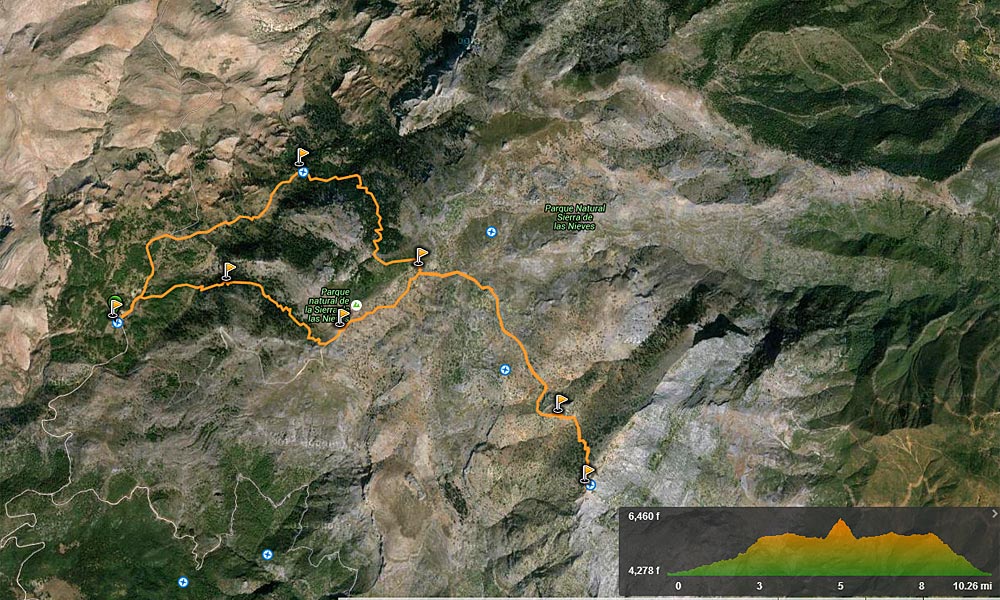 El Torrecilla is the highest summit in the Province of Málaga and stands 6,296 feet high. It is behind La Concha.

To start the route, we recommend ascending the San Pedro Alcántara to Ronda motorway. Some 18.6 miles from San Pedro is the 13.3 kilometre point and the entrance to the Sierra de las Nieves Natural Park. Take the exit to the natural part and park in the Los Quejigales recreational area that has an altitude of around 3,609 feet, and start the trek along the Carril del Sabinal.

On the first part of the ascent there are several streams and the ground is muddy (especially if it has been raining), as well as many trees. Further on, the path is surrounded by a magnificent Spanish fir forest and along the trial you will find wonders of nature, such as ice formations, birds and ancestral trees.

After the Spanish fir forest, you will come to El Puerto de los Pilones, a plain where there is a forest trail that you will take to the left. A few feet away there is a view point with an amazing and unforgettable panorama. Continue along the forest trial leaving the booster station to the left and keep going as far as El Torrecilla. As you climb, you can see to the right the old icebox where the snow was gathered to be sold on the coast.

In total, we are talking about an excursion that is around 15 miles long and that can last 6 to 8 hours. The most sensible thing to do is to return via the way you ascended. If you get tired going down, you can continue along the forest trail as far as Los Quejigales instead of descending through the Spanish fir forest, but bear in mind that the trail route is a little longer than through the forest.

Winter, when the summits are covered in snow, is one of the most attractive times to ascend the Sierra de las Nieves. However, bear in mind that in summer the hillsides can get icy and the trail can be very slippery. If you still decide to ascend, we recommend using crampons. In spring and autumn, the ascent is also wonderful, but in summer it will unbearably hot. 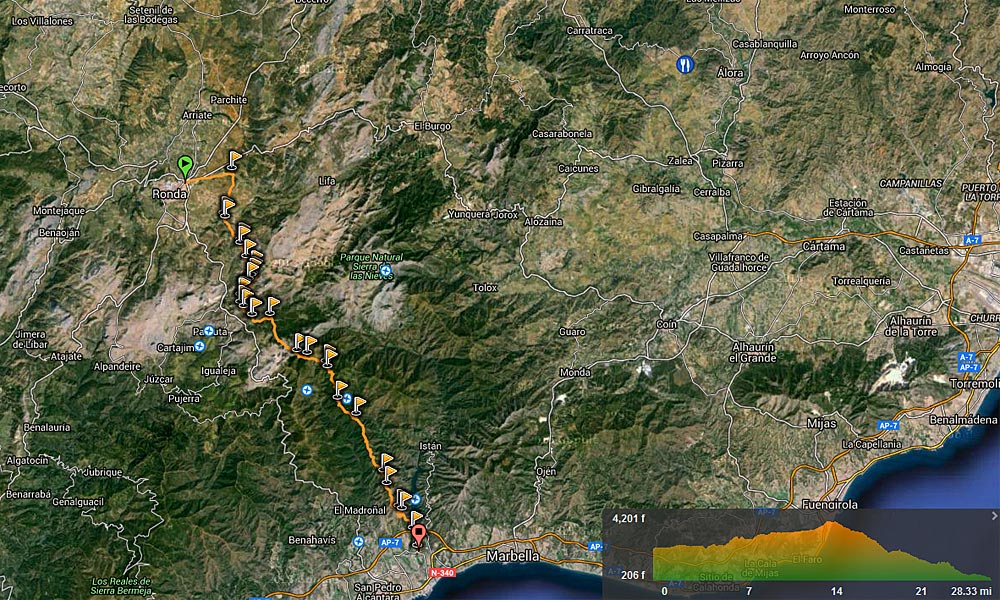 The first part is probably the hardest of the route, since in a mere 9.5 miles the forest trail ascends from sea level to an altitude of 2,953 feet, where El Puerto de la Refriega is located.

It is a total of some 28 miles} from San Pedro de Alcántara to Ronda, along very well signed trails that were recently prepared by the Government of Andalusia. The changes in landscape on the trail are amazing, since the path often changes gradient. On this trail, the sounds are mostly natural, since there is no traffic during the week. The route is thousands of years old and connected the cost with Ronda.

After crossed the second port, El Robledal becomes La Fuenfría, a lovely place where in olden times the Civil Guard Barracks was located. There highwaymen, merchants and civil guards lived alongside each other.

4 km north of Fuenfría there is an intersection from where you can go west to the Las Conejeras camp site, north to Ronda and west to Los Quejigales.

We recommend doing the route on foot in two stages: the first from La Quinta to Las Conejeras or Los Quejigales, and the second from there to Ronda.

When you see Ronda in the distance from the heights of the sierra, you will know from that moment that you belong to a group of hundreds of thousands of people who, throughout the centuries, have travelled to Ronda from San Pedro de Alcántara along this path, without the need for cars and petrol.

The trek can last some 13 hours and bear in mind that along the path there are no shops, kiosks or inns, and that you should bring your own food and drink. We assure you that it is well worth the effort. 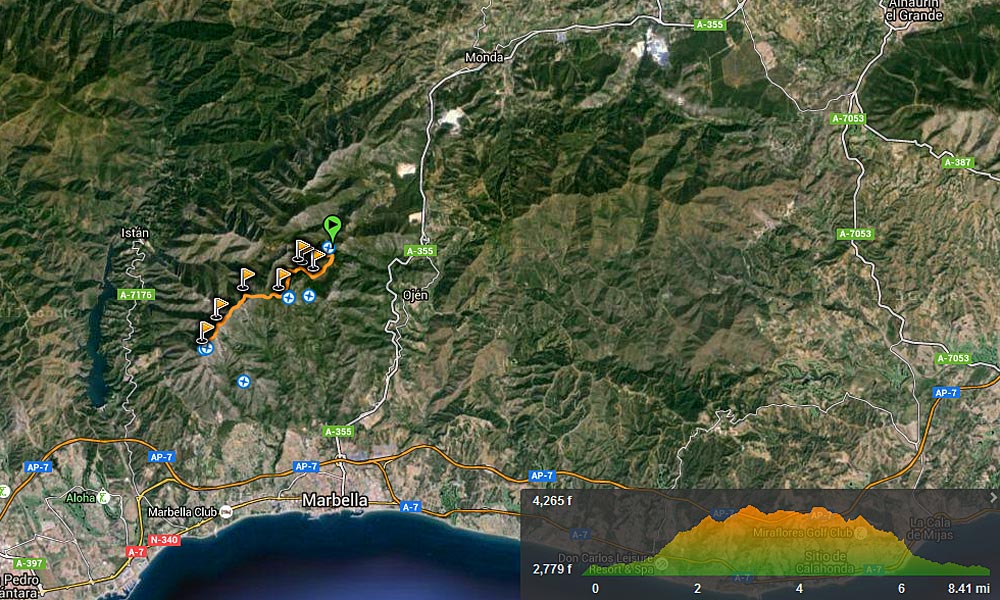 The ascent to La Concha, the 3,937 feet peak behind Marbella, on a clear day offers some extraordinary views of Marbella, the coast from Fuengirola to Gibraltar, the African coast in front and the entire Sierra de las Nieves.

La Concha can be ascended from Puerto Rico, which is located between the Ojén and La Cañada motorway. The path ascends just next to the La Kascada restaurant. Another alternative is to ascend by car along the Ojén motorway and then take a detour at the El Refugio de Juanar intersection.

From there, you can walk amidst olive and gall-oak groves and follow the signs to first climb La Cruz de Juanar and then the summit, La Concha.

If you start ascending from Juanar, it takes around 6 hours, and between 8 and 9 hours if you start from Marbella.

There are around 37 different types of wild orchid in the forest surrounding La Cruz de Juanar. The current olive grove, partly abandoned, has been putting down roots in the area for only around 100 years. The olive grove was an attempt to use the area with an altitude of almost 1,000 m for agriculture after the felling of the native tree, the Andalusian gall-oak, used as fuel in high altitude ovens.

The hotel and old inn, El Refugio de Juanar, is in the middle of a chestnut, pine and Spanish fir forest and offers trekkers returning from La Concha delicious mountain food. El Refugio de Juanar has a beautiful courtyard, and in winter a relaxed atmosphere with comfy sofas in front of large fires. 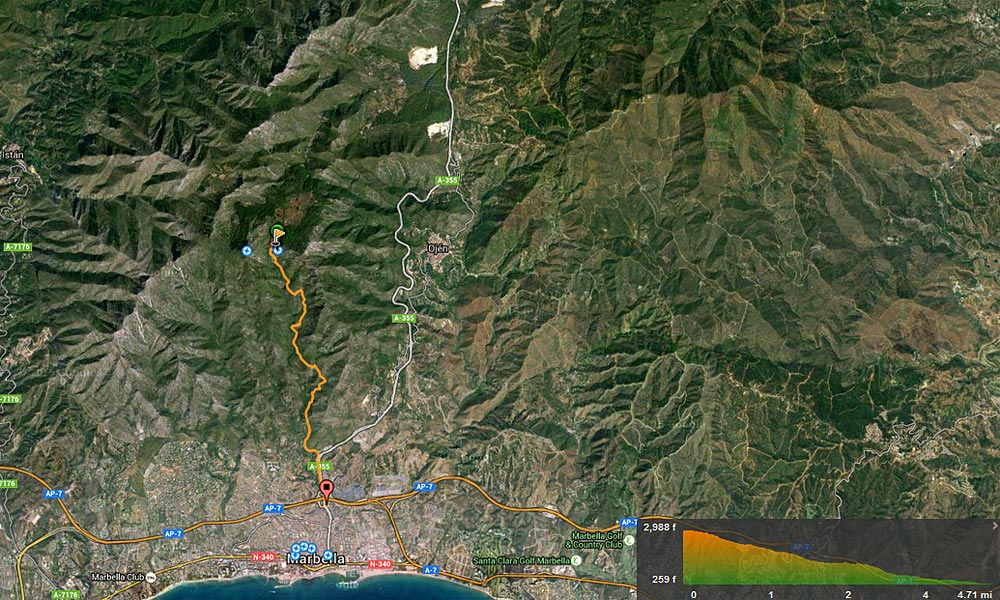 Marbella – Mirador de Juanar: there and back, approx. 4 – 5 hours

The path to start the ascent to Puerto Rico is located between the Ojén motorway and the La Cañada shopping centre. The path starts right next to the stream that descends next to the La Kascada restaurant. This path ascends as far as the Juanar viewpoint. Along the path the views are really pretty. The trek (there and back) lasts 4 to 5 hours, depending on stops. On the way up there are great views of the sierra mountains and on the way down you can enjoy the sea and coastal views.

On the way you will come across the La Kascada restaurant, where in summer you can enjoy a cool glass of beer on its lovely terrace, with the music of the waterfall in the background. The restaurant is named after the waterfall and was recently re-opened with a German chef at the helm.

* Respect the peace and quiet of the landscape you are visiting, so as not to disturb the fauna of the setting and to facilitate its viewing.

* Put your rubbish in the nearest bin. You can also pick up what you find and help keep the landscape litter-free.

* Gather all the information you can on the route: maps, itinerary description, etc.

* Use suitable footwear and material and bring enough water.

* Try not to go alone and inform your family and friend of your plans. Bring a charged mobile phone.

* All the trails on the southern face of the Sierra Blanca have steep slopes, so you need to be well equipped.

Trained and protected staff, without losing our family-friendly atmosphere. Crowding will be avoided.