Fuerte Group has been committed to responsible tourism for more than 60 years, meaning the Group can exist side by side with the surrounding environment and the cultural and socio-economic backdrop.

All our hotels approach sustainability as a guiding principle and implement new management systems that mitigate our impact on the environment in addition to boosting the local economy and culture.

We also focus on individual well-being, including that of our customers, employees and disadvantaged groups.

Each year, our Corporate Social Responsibility (CSR) report is edited, which includes a summary of the main socio-cultural, economic and environmental initiatives undertaken by establishments over the course of the year.

Thanks to our commitment with the Spanish Global Compact Network we have submitted our Communication on Progress (COP), a report where we state our continued support to the UN Global Compact an its 10 principles, including a description of actions or relevant policies related to Human Rights, Labour, Environment and Anti-Corruption.

As part of El Fuerte Group’s sustainable tourism and environmental respect strategy, one indicator that is subject to particular control is our carbon footprint, which indicates the amount of CO2 released into the atmosphere in relation to hotel activities undertaken and is expressed in tonnes or kilograms of CO2 per customer. In addition to the ecological footprint and energy consumption calculations.

It is possible to go on a virtual tour of the sustainability measures employed by El Fuerte Group, with all activities undertaken by the company in each part of the hotel shown in graphic form, so that customers also understand and get involved in environmental protection and respect initiatives.

Significant events throughout our professional experience 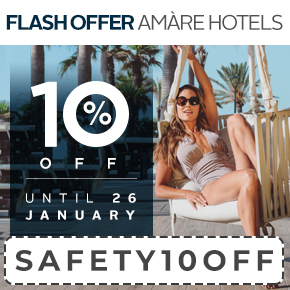 We want you to get this New Year 2021 off on the right foot with new dreams. To help, and in the hope that this year brings more joy for all, we’re giving you a 10% discount at any of our hotels, only available until 26 January.

And remember that at Amàre Hotels we offer you our Medical Guarantee so that you can enjoy a worry-free holiday. See the conditions on our Safety First website.