When you think about Marbella, immediately an image of glamour, money, celebrities, luxury cars and yachts, parties and plenty of sun, sea and sand comes to mind. As well as being one of the most important holiday destinations on the Costa del Sol, Marbella also has a beautiful and typically … Read More

Discover the other side of Marbella

When you think about Marbella, immediately an image of glamour, money, celebrities, luxury cars and yachts, parties and plenty of sun, sea and sand comes to mind. As well as being one of the most important holiday destinations on the Costa del Sol, Marbella also has a beautiful and typically Andalusian old town, with narrow streets, whitewashed houses and flower-filled balconies. Today we are discovering the other side of Marbella. Would you like to join us? 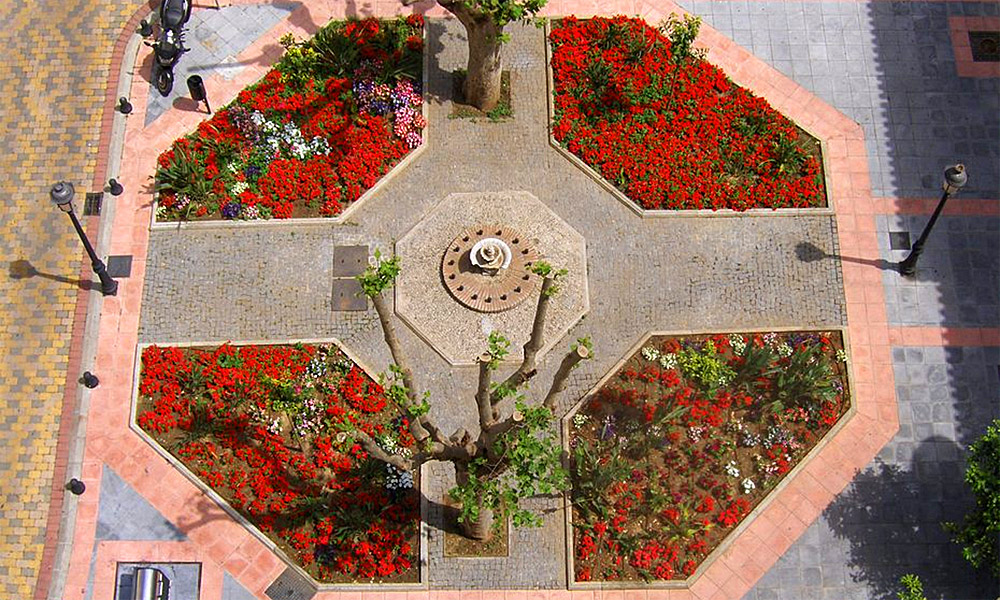 Barrio Nuevo can be found just a stone’s throw from Marbella’s old town. Its origin as a suburb of the current town dates back to the 18th century, when the city experienced growth. At the time, the neighbourhood of San Francisco already existed outside the walls to the north of the town. Barrio Nuevo is laid out around several streets, which have retained their traditional atmosphere despite heavy pedestrian and vehicle traffic. Its simple limestone, tile and wooden beam houses all used to have vegetable gardens and small animal enclosures.

In years gone by Tenerías creek separated the neighbourhood from the Castle walls, but nowadays the area can be easily accessed by pedestrians who want to see centuries-old houses with colourful window boxes, the Humilladero Cross, where Ferdinand II of Aragon accepted the keys to the city from the hands of the Moors on 11 June 1485, the chapel, neighbours sharing washing lines and gossip passed from window to window above the street. 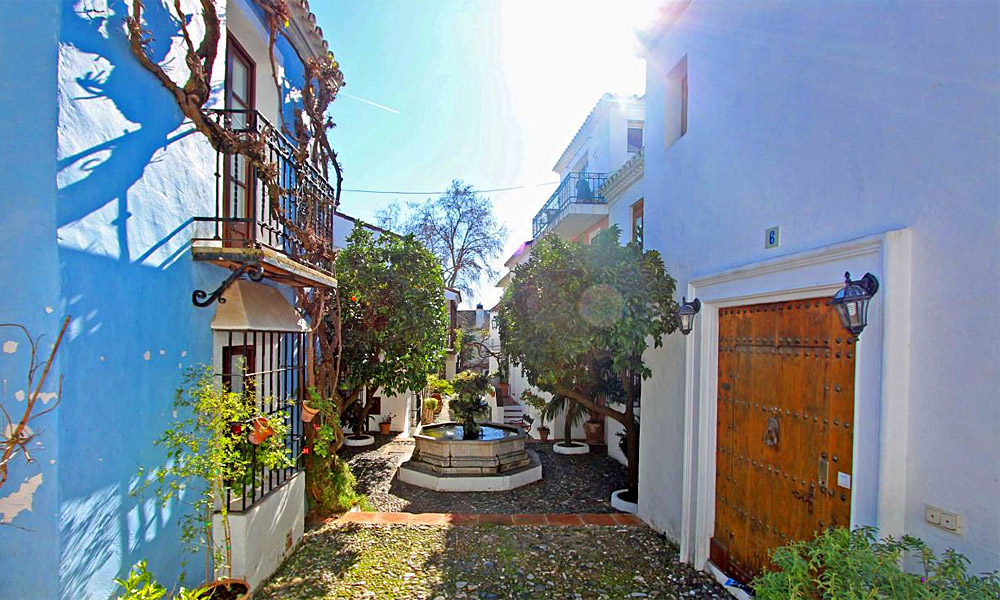 There’s a lot to see in the city if you escape the so-called “Golden Mile” connecting the city centre with Puerto Banús. Everything in general becomes more traditional and picturesque. This is the case of this neighbourhood. La Virginia is a place where you can find a traditionally Andalusian ambience with a touch of chic, with whitewashed walls, balconies overflowing with bougainvillea and geraniums, and traditional cobbled streets. It’s not a walled estate, but rather a neighbourhood full of beautiful houses, a slow pace of live and a minuscule fairytale plaza that looks like a perfect picture-postcard: a terrace for a bite to eat or a drink in the shade of whitewashed walls, flowers and aromas, the trickle of water and the tiny chapel. Overlooking the sea, beside the sea. Calle Guadalete has been the life and soul of this fishermen’s neighbourhood for generations. The Fishing Port in Marbella is just a few minutes from Plaza de los Naranjos in the old town centre, but it feels like it’s much further away.

The small white houses, many of which have been turned into restaurants and beach bars where the freshest fish in the city can be enjoyed, overlook the port facilities and Bajadilla beach. Their doors are always open, clothes dry above sunny pavements and windowboxes overflow with colour. We highly recommend a stroll to the edge of the neighbourhood, through the port and along the breakwater, from where you can enjoy amazing views of Marbella from the sea. 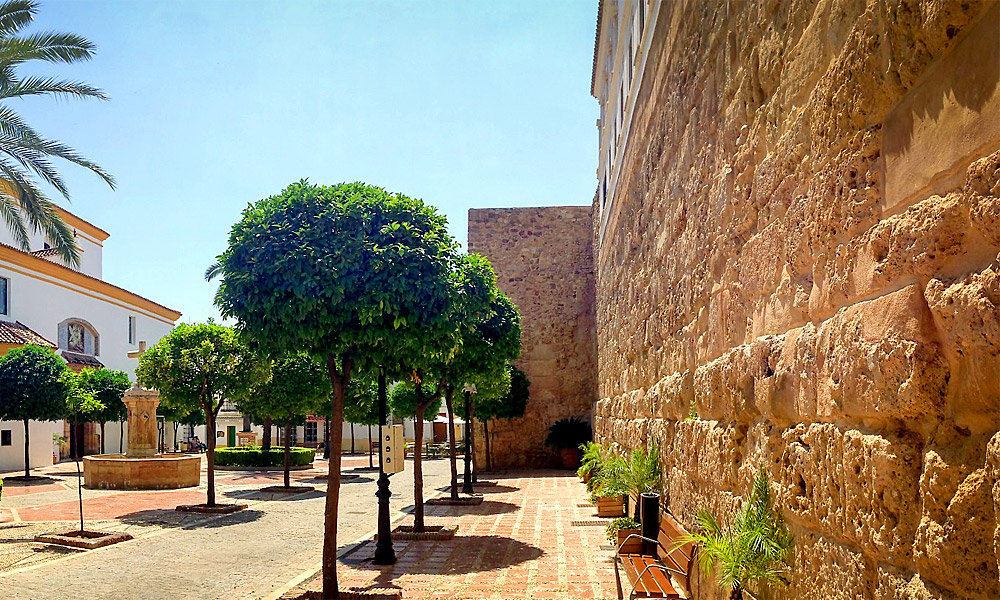 The fortifications around the old town, dating back to the 4th century, are known in the city as El Castillo. They were enlarged in the 14th century during the Nasrid dynasty, when they took on great strategic and defensive value. Only one tower of the old Citadel built on the highest part of the walls, at the north-east corner, can still be seen, although a lot of the walls themselves are still standing. A large restored section can be found in San Bernabé Plaza, opposite Encarnación Church, where some remains of Roman capitals used as building materials can be discovered. When it comes to Marbella’s beaches, it is worth emphasising that unspoilt nature can still be found along a part of the area’s coastline. An example of this is Cabopino Beach, one of the best nudist beaches in Spain and among the best kept in the Málaga region, precisely because it is located in a sand dune reserve.
A conserved and protected example of what the entire Malaga coastline used to be like. Vegetation is well suited to resist the burning year-round sunshine and lack of water, as well as the continuous onslaught of the wind. We highly recommend a visit to Torre de los Ladrones, which has been declared a Place of Cultural Interest.

JUST TAKE A STROLL AND DISCOVER… These are those who never put down their maps and make a beeline for the Walls, Encarnación Church and Plaza del Santo Cristo, but the best way to enjoy the old town is to loose yourself in its maze of streets without worrying about where you’re going. Take a stroll and enjoy the relaxed atmosphere and charming nooks and crannies. Make sure you don’t forget your camera!

Stalls and shops alternate with bars and restaurants; a proper Marbella old town experience involves pausing to browse boutiques and gift shops, but sampling tapas is the best thing of all: an evening tapas tour of the bars on calle San Lázaro as the lights come on in the evening is priceless.

It’s impossible to decide what to do and see in Marbella’s old town centre; the best recommendation that we can give you is to get out there and enjoy it.

Marbella: a tour of its old town